Fourteen of the world's most delicious cakes
Tips for restoring family treasures following disaster
The faces of Ellis Island
A peek inside Ancestry's headquarters
Fact-checking family folklore with DNA tests
A place in the county: Living in county home
The joy of competitive cornhusking
Thanks to Jana for introducing me to Twile
Timeless advice: Don't throw the baby out with the bathwater
Nancy shares resources on the joys of traveling in steerage

Posted by Heather Kuhn Roelker at 4:30 AM No comments:

My family recently visited Shenandoah National Park and the surrounding areas. Such a beautiful location. It was a short trip focused on enjoying the park with no time set aside for genealogy research. But I couldn't help but look at the beautiful view and think of my Virginia ancestors. 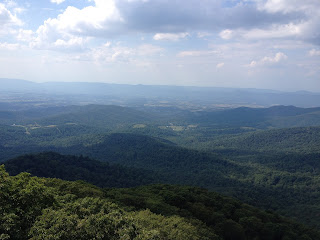 I have deep Virginia roots. My links to the Shenandoah area of the state include Augusta, Orange, Rockingham and Shenandoah counties and cross both my maternal and paternal lines.

As mentioned, I had no time to conduct genealogy research on this trip, but as a typical genealogist will, I did a little prep on the off chance that some research could be fit in. And it was clear right away that my genealogy research is not cross referenced by location and it would take quite a bit of work to iron it all out. One of the keys to extensive family history research are the records kept at the county level, and yet my filing system is not prepared to support those spur of the moment trips. What is a researcher to do? Create a tool, of course! 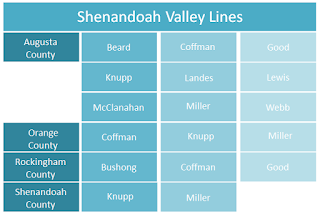 Now, when I'm out and about all I have to do is search for Shenandoah on my blog and I'll have quick access to each of the lines in that particular area. My hope is to continue this process in other locations, ultimately creating time-saving tools.
Posted by Heather Kuhn Roelker at 4:30 AM 4 comments:

Mud, Blood and Vegetables
The origin of the video game Easter egg
The Godfather of tween board games (oh Mall Madness, I miss you!)
Making sorghum molasses the old way at Southern Sleuth
The seizure of European records in World War I
Mining your memories for genealogy clues
The rise of the modern sportswomen
Verdun: The killing field
5 questions hidden in the U.S. census
Colonial Williamsburg's education resource center from Genealogy's Star
The Legal Genealogist shares a cool FTDNA tool
Posted by Heather Kuhn Roelker at 4:30 AM No comments:

Martha Stewart and Snoop Dog are teaming up...not sure if this a good thing or not
How Chuck Taylor taught America to play basketball
Artist draws real-life Pokemon
Thanks, Prohibition! How the Eighteenth Amendment fueled America's Taste for Ice Cream
U.S. still paying a Civil War pension
Final word on the Civil War
Love Marion's quote: "Before I become an ancestor, I want to have all my genealogy materials organized and analyzed." Check out her organizational tools here at Climbing My Family Tree
Artist adds color to historic photos
Hidden side of Ellis Island
Amanda at ABT UNK shares a then/now look at a lovely beach
Randy Weaver asks: Am I related to Donald Trump?

Posted by Heather Kuhn Roelker at 4:30 AM No comments: 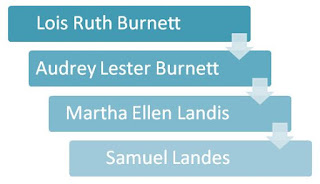 Samuel Landes is a third great grandfather through my paternal line. Samuel was born in 1822 to Samuel Landes (1788-1849) and Elizabeth Sheets in Staunton, Augusta County, Virginia. As with some of my other lines, spelling has become an issue with the Landes name. I have seen it as Landes, Landis, Landess and Landiss. I've also realized that I do not have a lot of information on this line. I love that this writing prompt is helping to highlight research gaps!

Samuel was the fourth of 8 known children with Elizabeth Sheets. Samuel Sr. and his life are a little difficult to track. Samuel Sr. died in December 1849 as indicated on the 1850 census mortality schedule. I can find no trace of Elizabeth's death, however, I found an online history that states Elizabeth Sheets Landes died in 1828 following the birth of twins, more than likely from complications from the birth. I have no official record of this, but Samuel does appear to remarry an Elizabeth Welch and has additional children.

The Landes family were farmers in Augusta County. I have not found a record of the senior Samuel Landes' will, but in the 1850 census, his second wife is living on the farm with her children. The older children appeared to have moved on.

Samuel Jr. could have been the right age to have served in the Civil War. There are records of a Samuel Landes enlisting in 1862, but I cannot confirm that it is the correct Samuel. However, Samuel came from Mennonite roots and more than likely would not have fought in the war.

Samuel Jr. is listed as both a miller and a farmer in  Augusta County, Virginia. At some point between 1870 and 1880, the family moves to Johnson County, Missouri. It is unclear why the family leaves Virginia, but he continues farming in Missouri.

Samuel dies in Kingsville, Johnson County, Missouri in 1897 and his wife, Elizabeth, dies just three years later. They are both buried in the Kingville Cemetery. 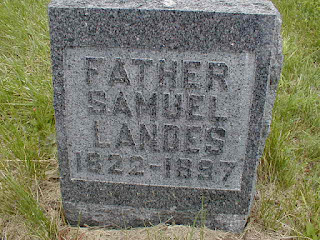 This post is part of my on-going goal of 2013 to research each of my 32 3rd great-grandparents more in-depth. Samuel is #11 on my list.
Posted by Heather Kuhn Roelker at 4:30 AM No comments:

Left-handed penmanship contests try to help Civil War amputees
Smithsonian seeks beer historian
Gems of Australia's quilting history (weaving in the other hobby!)
The forgotten kaleidoscope craze
The Victorian-era ghostbuster
John at Filiopietism Prism posted an interesting look in to Rhode Island nurses training and has a great list of reads here
Linda at Many Branches, One tree writes of a stranger's kindness
Help solve a photo mystery at Where Were They Then?
Ten ways to share your genealogy at Nutfield Genealogy
Dawn at Wisteria works to save an historic photo album from obscurity
Fun Harry Potter family tree craft
A millennial immigrant story
Posted by Heather Kuhn Roelker at 4:30 AM 2 comments: 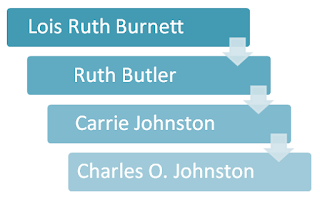 Charles O. Johnston is a third-great grandparent through my paternal line. Charles was the last child of seven known boys born to Exum and Alice (Unknown) Johnston. His parents were both from Virginia, though I have been unable to confirm from where. Several online genealogies list the couple from Isle of Wight County, but I haven't be able to find any proof. Since revisiting this family, I have also found information stating the Exum was married at least three times. Therefore, I do not have proof the the children below are with his relationship with Alice or with another spouse. However, these are children that I feel relatively certain belong to Exum.

The family were farmers and according to the 1850 census, Exum owned 2500 acres, a large farm in my mind.

Charles is listed on censuses as a shoemaker. That is a first that I have found in my research. Though he would have been approximately the right age to have served in the Civil War, I have found no reference to military service. Charles married Louann Lightner in Howard County, Indiana on April 22, 1863. 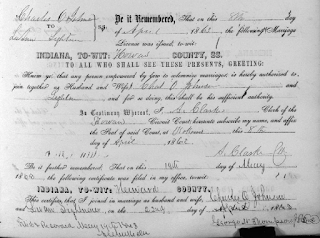 Soon after, the couple moved to Hobart, Lake County, Indiana where they lived until their deaths.

﻿
The couple's youngest son, Adrian Lightner Johnson, was an avid genealogist and tracked the Lightner family line back to the Mayflower. However, I have been able to find little to no research from Adrian on the Johnston line. This is an interesting line in that I can't find much proof of anything. One issue could be the age old problem of spelling: Johnston versus Johnson. That "T" can make a big difference!

This post is part of my on-going goal of 2013 to research each of my 32 3rd great-grandparents more in-depth. Charles is #15 on my list.
Posted by Heather Kuhn Roelker at 4:30 AM No comments: 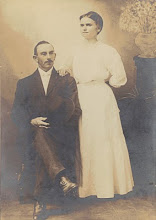